A TOUCH OF ELEGANCE AND CLASS, MY MOOSE JAW. 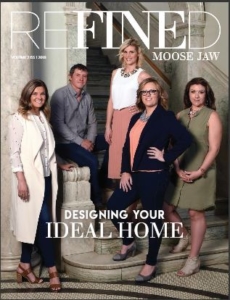 A TO Z: A PRAIRIE LEGACY CELEBRATING 25 YEARS OF A PRAIRIE ALPHABET 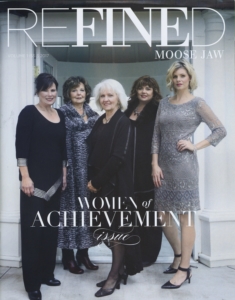 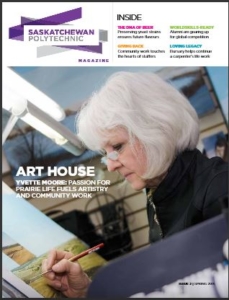 From painting the expressive skies to flying through them, Yvette Moore’s journey as an artist is far from conventional. Born and raised in Radville, Saskatchewan, Yvette learned the value of hard work early on the farm. Her roots may be ordinary, but her accomplishments are extraordinary.

It is the age old inspirational tale of how hard work and perseverance pay off. Yvette’s mantra of ‘learn to do by doing’ rings true in every facet of her life and business. Though her success began with her exquisite capabilities with a paintbrush, the canvas of her life reveals a much larger and complex picture. When Yvette looks back on her life and her journey, she comments that it was “overwhelming, as the road was never straight. There were many obstacles and many challenges, but the opportunities were also there, so I never stopped and kept on trying.”

Yvette began painting as a hobby while raising her four children in Radville. Showing her work at local craft and art shows, Yvette’s confidence as a budding local talent sparked her entrepreneurial spirit. Her passion became her profession, but she has never forgotten her humble beginnings. From selling artwork from her home to welcoming thousands of guests through the doors of her award-winning gallery in Moose Jaw, her mantra has resonated in every step of her life.

It may be the twenty-six illustrated images from the widely popular “A Prairie Alphabet” written by Jo Bannatyne-Cugnet that taught us the ABCs of the prairies and that has acquainted us with her work. Perhaps it was a visit with friends and family to the Yvette Moore Gallery, or maybe it was enjoying homemade specialties in the popular Gallery Café, but people have become accustomed to the attention to detail that appears in every aspect of Yvette’s creations.

She wants to share what she finds so uniquely remarkable about Saskatchewan, whether it is in images or the tastes so distinctly reminiscent of home. Yvette has often said “it is so easy to paint the prairies—we have so much to share about who we are and where we live.” Her passion rings true in every detail of her work and business, and it has not gone unnoticed.

Yvette’s dedication and passion rings true in every detail of her work and business and has not gone unnoticed by those recognizing her entrepreneurial spirit, her advocacy of Saskatchewan and local art, and her community involvement. In November 2007, Yvette was awarded the great honour of being appointed the Honorary Colonel of 15 Wing Moose Jaw. A truly remarkable Canadian privilege bestowed on very few, the appointment honours those whose strong community support connects Canadians with the Canadian Forces. A privilege that has honoured outstanding citizens from across the nation, the appointment still surprises Yvette with every salute. Colonel Marc Bigaouette, Commander of 15 Wing explains that, ‘’the Air Force looks for role models, caring Canadians with strong values and ethics who have displayed leadership and a strong sense of community. Yvette Moore is all this and so much more.’’

The young girl on the farm may have never imagined herself in full military uniform, climbing aboard a Harvard II aircraft and taking flight, but just as she lives her life every day, she also knows dreams have no boundaries. The honour is one that Yvette respects profoundly: “It has opened up a whole new world for me to be part of the Canadian Forces in this capacity. To meet the men and women and their families that are in the military and learn about their struggles and joys has been overwhelming and humbling. I have lived my whole life in Saskatchewan – they have lived in many locations and have had experiences that we can’t even imagine.”

In 1999, Yvette had the opportunity to purchase the historic Land Titles building in downtown Moose Jaw. This venue provided her with the space to display her own work and to showcase the distinct and exceptional quality of Canadian and Saskatchewan artisans. Within the grand walls and heritage of the century old building, the doors have been opened to the world to view the art and craft from all corners of the province.

The gallery often hosts exclusively designed events for such groups ranging from the Court of Queen’s Bench judges to the Premiers Conference—welcoming guests from around the world into what has become one of Saskatchewan’s premier galleries. The Yvette Moore Gallery offers a first class venue complete with a unique prairie charm and hospitality. Yvette remarks that, “it has been an amazing opportunity to have a gallery in such a beautiful historic building that encapsulates the heritage and the artistry of Saskatchewan.”

The years of hard work and community commitment has led Yvette to many boards and organizations such as Tourism Moose Jaw, the Moose Jaw Chamber of Commerce, Southwest Tourism and Moose Jaw Arts in Motion, to name a few. Acting as an example of entrepreneurial endurance and creative capabilities, her voice and dedication to the local arts community encourages many to pursue their own interests in the arts. As a single mother of four with a paintbrush and a dream, to a respected business owner, a celebrated and accomplished artist, and an honorary liaison with Canada’s most valiant institution, Yvette has learned every day by doing. No matter the title or accomplishment or success that continues to come her way, Yvette never leaves her roots far behind—the roots that are deeply embedded in the Saskatchewan spirit.

From small town prairie girl to Honorary Colonel of 15 Wing Moose Jaw, Yvette’s ethic of hard work has been her strongest asset in achieving new levels of success each and every day.