Pyrrha designers, Danielle and Wade Papin, have been creating jewelry from their Vancouver studio since 1995. 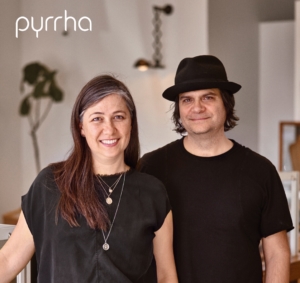 Handcrafted using authentic wax seals and imagery from the Victorian era, each piece is cast in reclaimed precious metals using time honoured, old world techniques and is designed to inspire the wearer with its symbolic meaning culled from heraldry. As a carbon neutral certified BCorp, Pyrrha is committed to environmental responsibility, accountability and leadership in the creation of its jewelry.

In 1993, Wade and Danielle Papin met, fell in love and began handcrafting jewelry at their kitchen table in Vancouver. Two years later—following myriad conversations about their shared appreciation for good design and old things—they founded Pyrrha with a commitment to letting their materials inspire their work.

Danielle grew up in small-town Ontario where her first foray into jewelry design was making tiny beaded friendship pins for her classmates. Following high-school (and a brief, not entirely regrettable stint as a Dead Head) Danielle moved to Toronto to pursue a photography degree, though she never stopped experimenting with bent wire and beads. Eventually, the West Coast beckoned and, within days of arriving in Vancouver, Danielle met Wade.

A dapper Montreal émigré with a penchant for music and architecture, and a formal education in journalism, Wade’s restless, entrepreneurial spirit found a home in jewelry design. Together the pair taught themselves sophisticated soldering and silversmithing techniques learned from books and informal tutorials with local masters. “We’d come up with ideas inspired by what we saw in the city,” says Danielle. “We both loved Danish modern and our early stuff definitely had that feel.” It was, she adds, “a painful process, but we were determined to stick to what we loved and do it the way we wanted.”

Pyrrha’s original Cat’s Eye line was picked up and quickly became beloved in design stores throughout the US, including The Conran Shop and The Andy Warhol Museum. Over the next decade, Wade and Danielle introduced other lines in varying styles and gained a following across the continent. Still, it wasn’t until the couple came across a small, dusty box of badly damaged 19th-century wax seals at an estate sale that they arrived at what would become the heart and soul of their work.

Casting jewelry from rough-hewn, antique seals spoke to Wade’s broader interest in imperfection. “From a musical point of view, I’m attracted to a raw, not overly-produced sound,” says Wade, whose record collection favors bands like The Stooges and The Velvet Underground. In the designer’s mind, those musical qualities manifest in Pyrrha’s talisman line in that, as Wade puts it, “they’re original and deeply personal, and there’s also that idea of being able to see the maker’s hand.”

The resulting jewelry is Pyrrha’s now iconic line of talisman necklaces, bracelets, cuffs and rings made from reclaimed silver, bronze and gold. Each piece is handcrafted in Pyrrha’s Vancouver studio—a striking contrast to the glut of overseas, factory-made, mass-produced jewelry that is so common in their industry. “Everything seems to be cranked out at a staggering pace and then left for dead,” says Wade. “Because we live in such a throwaway society, it’s necessary—and joyful—to create some things that can be kept.”

While Pyrrha remains a local treasure in its native Vancouver, the talismans have captured international attention. The line has been embraced by celebrities and style icons the world over, and retails at such global boutiques as Liberty of London, Le Bon Marche Paris and United Arrows of Japan. In 2010, Wade and Danielle took what felt like their natural next step, opening their extraordinary flagship store in L.A. The Pyrrha store allows fans to experience the Pyrrha world, as well as to see the extensive talisman collection in its entirety.

As a certified carbon-neutral B Corp, we’re committed to environmental responsibility—our jewelry is sustainably handcrafted with 100% recycled metals in our Vancouver studio using antique wax seals and imagery from the Victorian era.

Tell your story with a sustainably handcrafted talisman that speaks to who you are, where you’ve been, and where you’re going. 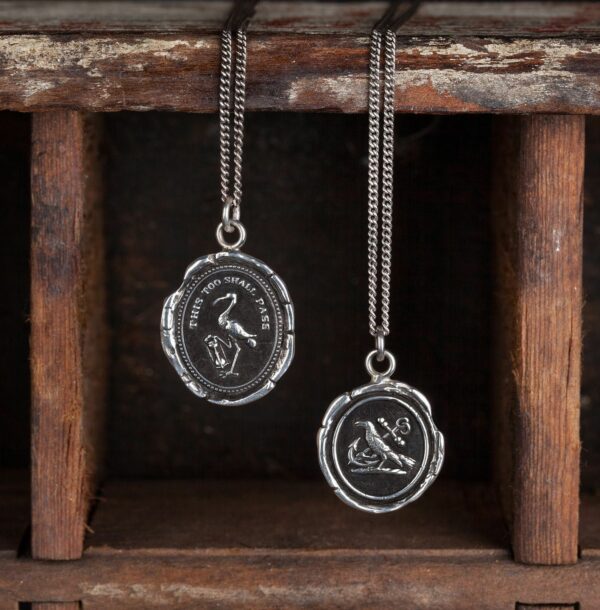 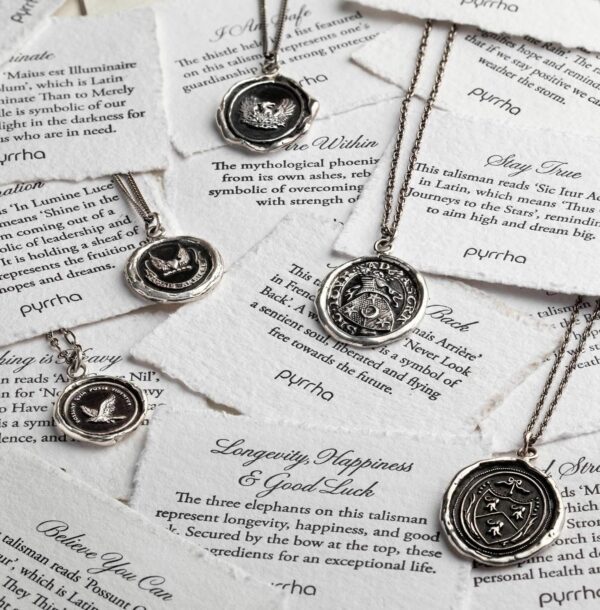 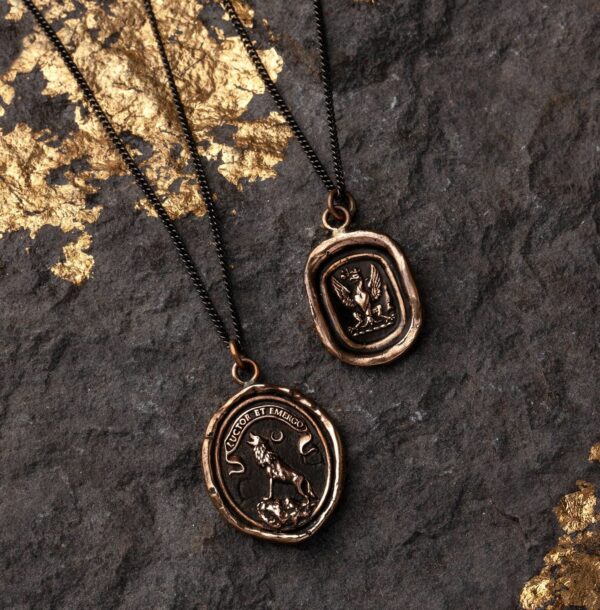 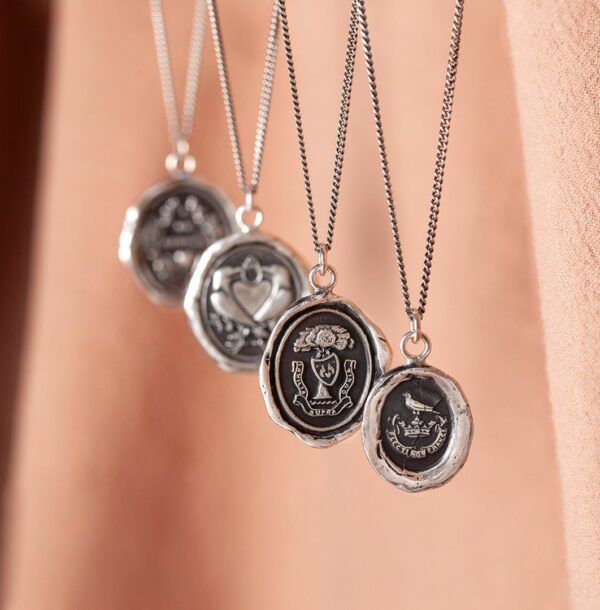 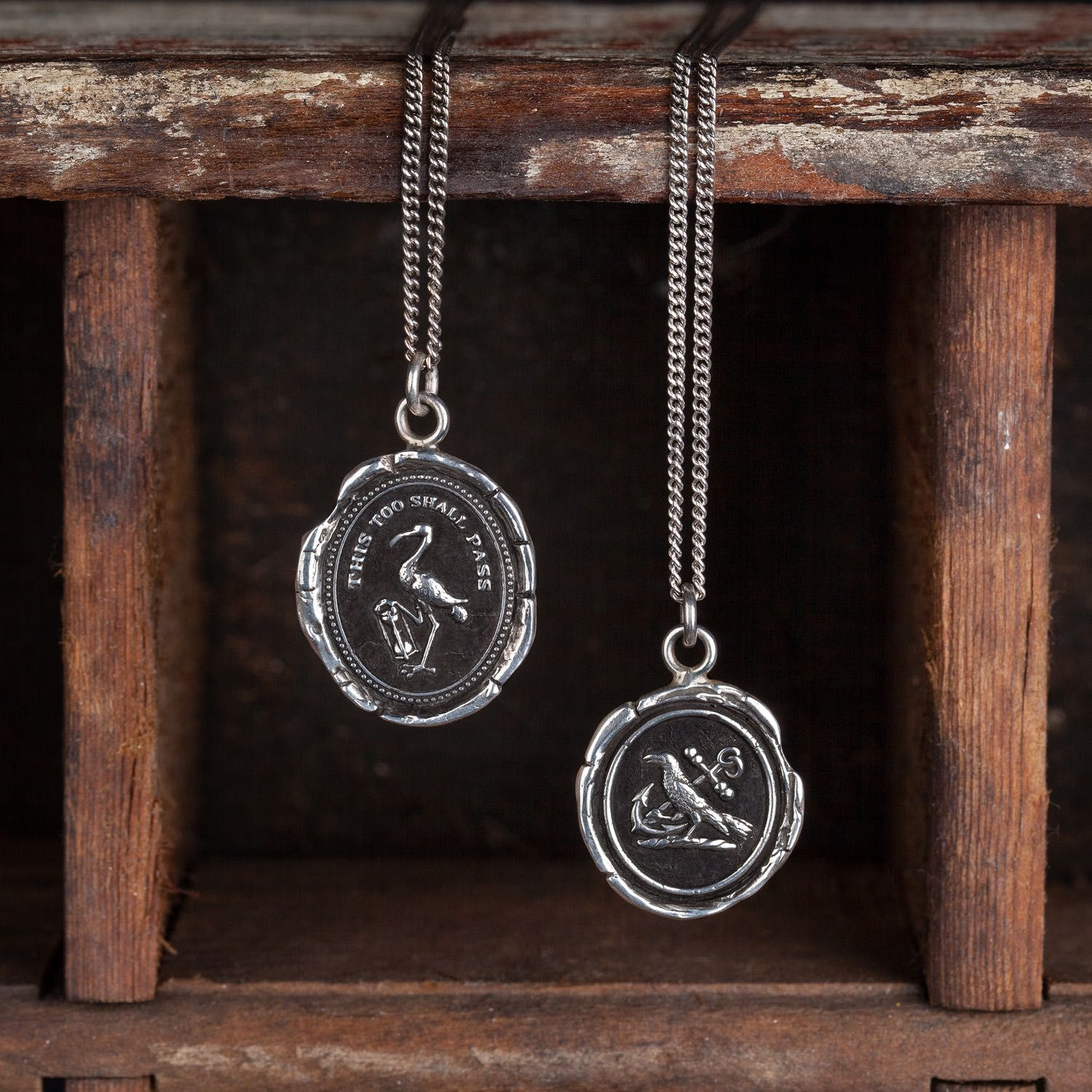 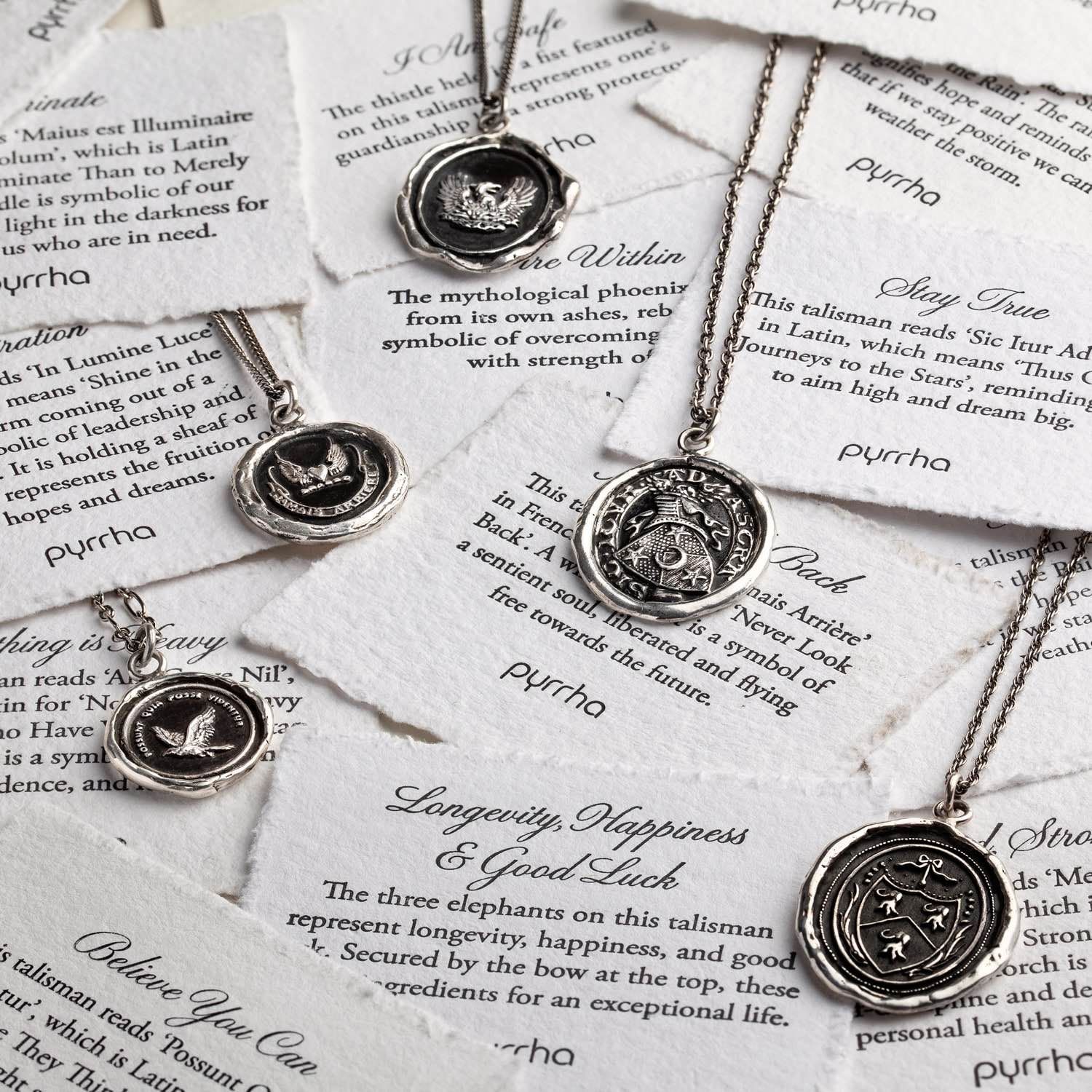 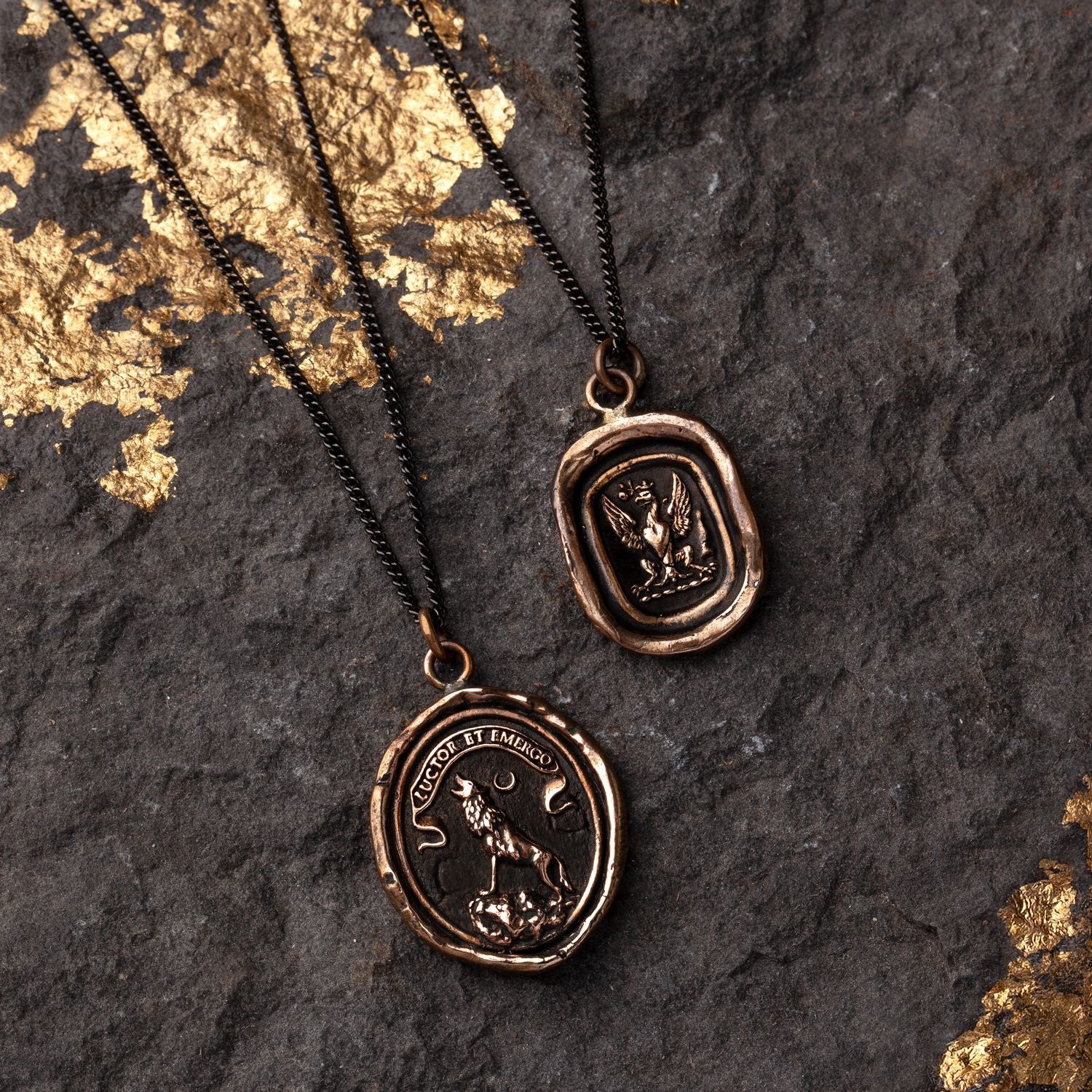 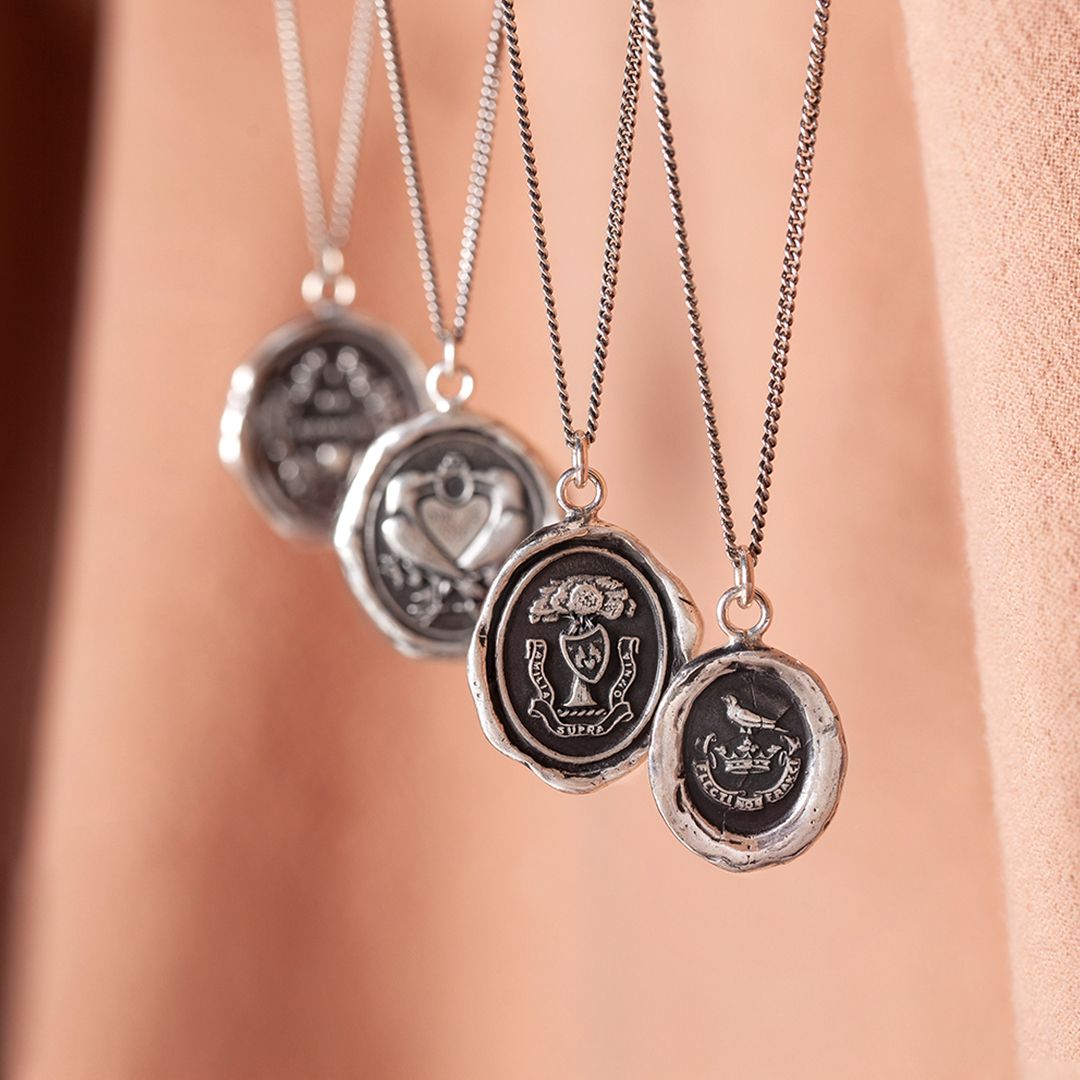 Our collection is ever-changing and availability may not be immediate.

Special Orders can be made for specific choices.